Tens of thousands of opponents of Belarusian President Alexander Lukashenko have gathered in Minsk to protest against disputed elections. 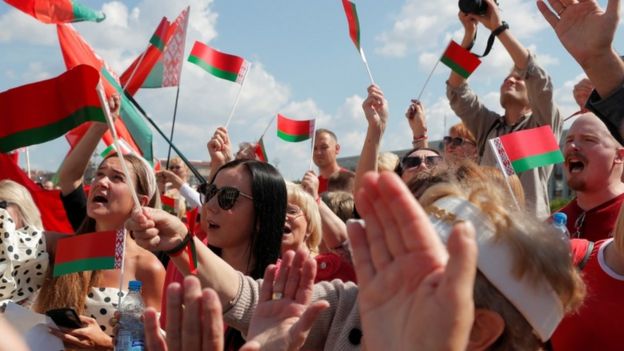 The “March for Freedom” in the centre of the capital comes amid growing anger over alleged poll-rigging and police violence at subsequent protests.

Meanwhile, in an address to a smaller crowd of several thousand, Mr Lukashenko blasted opponents as “rats”.
He called on supporters to defend their country and independence.

The rival rallies were taking place after Russia agreed to offer security assistance in the case of external military threats to Belarus. It emerged that Mr Lukashenko had twice spoken to President Vladimir Putin over the weekend.

The long-time Belarus leader also voiced concerns over Nato military exercises taking place in neighbouring Poland and Lithuania and launched into a tirade against the Western military alliance.

Nato – which sent four battle groups led by Britain, Canada, Germany and the US to the Baltic countries after Moscow’s annexation of Crimea in Ukraine – rejected allegations of a build-up in the region.

The unrest in Belarus erupted after Mr Lukashenko claimed a landslide victory in last Sunday’s election, the result of which has been condemned amid widespread allegations of vote-rigging.

The Central Election Commission says Mr Lukashenko, who has been in power since 1994, won 80.1% of the vote and the main opposition candidate Svetlana Tikhanovskaya 10.12%.

But Ms Tikhanovskaya insists that where votes were properly counted, she won support ranging from 60% to 70%.