Lebanon in mourning after massive explosion in Beirut

A huge explosion which occurred in Lebanon’s capital Beirut has killed at least 78 people and injured more than 4,000 others on Tuesday. 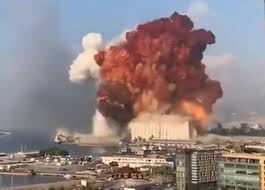 According to eye witness report, the blast began with a fire at the port which exploded into a mushroom cloud leaving the whole city shaken by the blast in mourning.

President Michel Aoun said 2,750 tonnes of ammonium nitrate had been stored unsafely in a warehouse for six years.

He scheduled an urgent cabinet meeting for Wednesday, and said a two-week state of emergency should be declared.

The country will observe an official period of mourning for three days from Wednesday.
President Aoun also announced that the government would release 100 billion lira (£50.5m; $66m) of emergency funds.

“What we are witnessing is a huge catastrophe,” the head of Lebanon’s Red Cross George Kettani told local media. “There are victims and casualties everywhere.”

Officials said on Tuesday that an investigation was under way to find the exact trigger for the explosion.

The ammonium nitrate had reportedly been unloaded from a ship impounded at the port in 2013, and then stored in a warehouse there.

The explosion comes at a sensitive time for Lebanon, with an economic crisis reigniting old divisions as the country struggles with the coronavirus crisis.

Tensions are also high ahead of Friday’s verdict in a trial over the killing of ex-Prime Minister Rafik Hariri in 2005.

The explosion occurred just after 18:00 (15:00 GMT) on Tuesday. Local media  showed people trapped beneath rubble and severe damage, enough to put the port of Beirut out of action.

A witness described the explosion as deafening, and video footage showed wrecked cars and blast-damaged buildings.

Shoprite debunks rumours of planned exit, says ”We have only just opened up to Nigerian Investors”